Simulation theory has become mainstream mainly due to Elon Musk and other high profile proponents of the idea. Recently, on the Joe Rogan Experience podcast, Rogan brought Nick Bostrom as a guest. Bostrom is a philosopher from Oxford University who has been working on the topics of superintelligence and other technologically caused existential risks. I advise you to go and listen to their conversation (episode 1350) as this writing is a direct response to the last 30 minutes of the conversation.

The overall conversation was relatively smooth sailing, touching various topics such as AI and its impacts on the future generation. Then the conversation moved to simulation theory, this halted the flow of the conversation like a door stopper. The main problem is Rogan’s understanding of the probability theory.

We assume that humanity will continue to exist with the advancement of technology which can solve existential threats. Further, we assume that humanity’s interest to create simulations is durable, and we will continue to create simulations for a greater understanding of humanity or for pure entertainment. Given the former assumptions are true, humanity will create millions of simulations. Therefore, there will be trillions of simulated beings created. As the number of non-simulated beings or “Architects” is relatively much smaller than the number of simulated beings, as a result of probability, we are most likely a simulation.

The Frustration and then the Curiosity

Rogan absorbs Bostrom’s words and asks, ”but how do we know that we have created a simulation?”. This leads to an unfulfilling, highly frustrating conversation that fails to come to an understanding, even with Bostrom’s attempt of using thought experiments and various alternative explanations.

Looking at the comment section of the youtube clip and Reddit, I see most of the commentators are baffled by Rogan’s ability to comprehend the basic concept of probability. I was also one of the listeners who wanted to just jump in and shake Rogan vigourously into an epiphany.

But I had time to reflect, I came to a better idea of what Rogan was truly asking. The core question is “What is the evidence that our current position in time or the present, is after the first creation of indistinguishable simulation?”.

To understand this point of view, let’s visualize the timeline of the so-called “Architects”.

Timeline of the “Architects”

Here we see a highly simplified timeline of the real biological humanity or the “Architects”. At the start of the existence of the architects, we will name the “Origin”. We assume that time is linear, and humanity will not go extinct due to technological advancements.

Now lets experient on the probability that we are in a simulation if the “Present” (present time of the Architects) is at different positions in the timeline.

Case 1 – If the “Present” is after “Simulation Commodification” 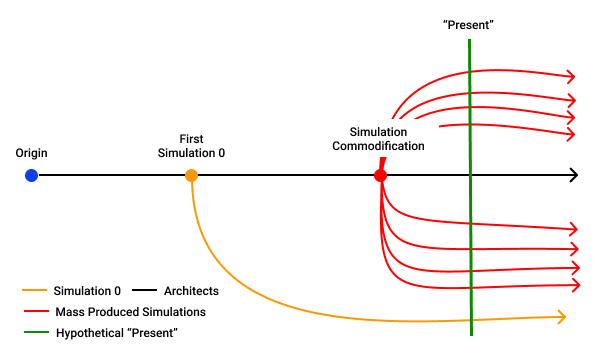 If the “Present” (in the viewpoint of the Architects) is after the point of “Simulation Commodification”, the probability of us being in a simulation significantly high, as described in the probability theory there will be multiple simulated beings created. Therefore, it will require magnificent luck to be an “Architect”, as there are so many magnitude more simulated beings.

But I will argue that the probability of us being in a simulation if the “Present” is after the “Simulation Commodification” is 100%. This is derived from the assumption that we currently do not have the technology to create multiple simulations, this then eliminates the option that we are an “Architect”, thus we are a simulation. 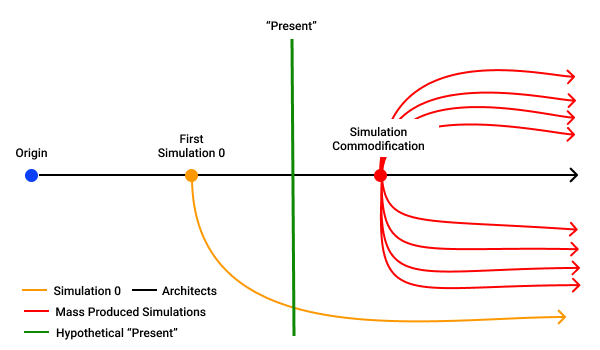 The elimination of the probability that we are the “Architect” will also hold even if there is only 1 simulation created we will be a simulation, as we do not have the technology to create a simulation that is indistinguishable from reality.

If the “Present” is before “Simulation 0”, clearly we are the “Architects” as we have not reached technological maturity and simulation has not been created yet.

So the focus should be on what I call the “Simulation 0 Threshold Argument”. Is the “Present” of the “Architects” before or after the inevitable first creation “Simulation 0”?

I hope this angle of thought experiment can assist in the pursuit of the truth of simulation theory.

View all posts by microselfdevelopment